Gallery 11/07/95 opened on July 12, 2012, is marking its tenth anniversary this year. Conceived as an institutional hybrid between a museum and a gallery, Gallery 11/07/95 has become an important point on the cultural map of Europe over the past ten years. Taking the genocide in Srebrenica as its reference topic, Gallery 11/07/95 strives in its work to offer an alternative to the dominant narratives that place crime and the perpetrators at the center, and reduce the victims to statistics and numbers.

In addition to the permanent exhibition about the Srebrenica genocide, Gallery 11/07/95 also dealt with the themes of the Second World War, war in Syria, the siege of Sarajevo, and hosted numerous delegations from the worlds of diplomacy, politics, culture, art, etc. The Gallery exhibited original “ Anti- Masonic” posters from the collection of world- renowned designer Mirko Ilic, then photographs of the siege of Sarajevo by Paul Lowe, photographs by one of the most awarded photographers today- Ron Haviv, posters by Design Group Trio etc.

Former Chancellor of Germany Angela Merkel, British Royal Princess Anna, Crown Princess of Sweden Victoria, Minister of Foreign Affairs of Germany Annalena Bearbock, winner of the Nobel Prize for Literature Orhan Pamuk, artist Michelangelo Pistoletto, are just some of the names that have visited the Gallery 11/07/95 in the past ten years.

Gallery 11/07/95 is marking its tenth anniversary with a series of activities. On the facade of the building where the Gallery is located, at the address Trg fra Grga Martic, a large -format photo of “Doll” by photographer Tarik Samarah is exhibited. Along with the photo, the following explanation text is shared: 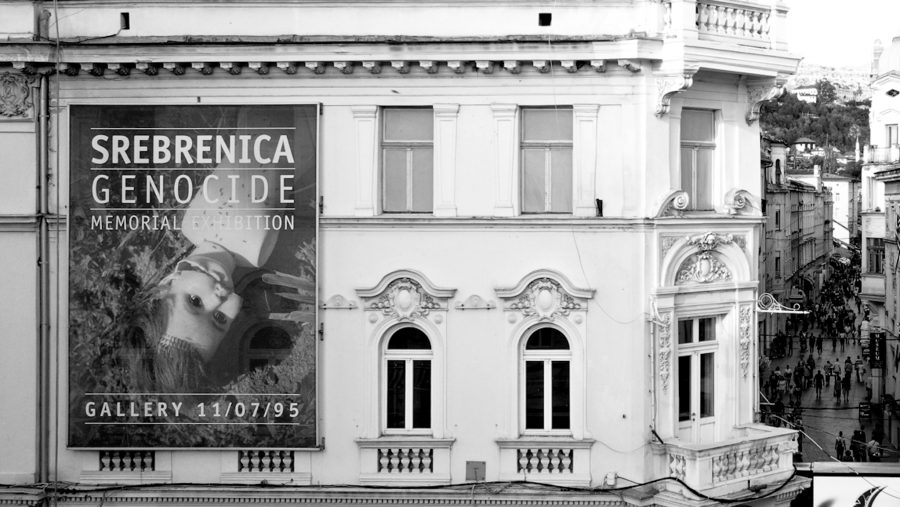 The photo of the doll on the mass grave was taken by Tarik Samarah in Kamenica near Zvornik in 2002. Beneath the doll with a severed face and no arms, covered in ants, which was left as a message, lay a secondary mass grave with over 600 hundred incomplete bodies dismembered by heavy machinery in order to hide the crime.

The doll was a message and a threat that the crime was not over, that it could continue, be repeated and that the truth should not be known. However, the photograph, as a captured moment of the unfinished present, depicts an event that escapes the possibility of expression, because the trauma is so powerful that it exceeds the limits and possibilities of language. It evokes the repetitiveness of a moment in which the doll’s message is our present, past, and future at the same time.

The doll is a message that the genocide is still going on and that it is looking at us through the eyes of all those who repeatedly say that there was no genocide.

Believing that art, among other things, works by shifting our expectations and forcing us to think about a particular topic, exhibiting work in a non-standard (external) space is an artistic intervention through which Gallery 11/07/95 seeks to contribute, within the framework of culture, to the construction of narratives about the Srebrenica genocide.

Along with the exhibited work on the building, the exhibition “Bosnia 1992-1995” made by photo reporters who reported on wartime horrors in Bosnia and Herzegovina in the nineties, was opened in the Gallery.

The mentioned events represent the beginning of a series of activities that will be realized this year in the Gallery 11/09/95 on the occasion of the tenth anniversary of its work.

Tarik Samarah, the founder of the Gallery and the author of the permanent exhibition, emphasized that in the future the Gallery will continue to work on the artistic presentation of the Srebrenica genocide, as well as organize events dealing with the themes of suffering and war in different parts of the world.

The Mayor of Stari Grad Municipality, Mr. Ibrahim Hadzibajric, on the occasion of the tenth anniversary of the Gallery 11/07/95 stated the following:

“As an important monument and a place of special piety dedicated to the permanent preservation of the memory of the Srebrenica genocide, the Gallery 11/07/95 made a significant contribution to ensuring that the truth about one of the greatest crimes of the twentieth century is presented with dignity on a local and international scale. Institutions such as Gallery 11/07/95 serve as a strong reminder of the importance of condemning war and preserving peace, but also of the obligation we bear to ensure that the innocent victims are never forgotten and that the justice we owe them is satisfied.”

July 12, as the founding day of the Gallery 11/07/95 was deliberately chosen, as a day when memory of the genocide begins. The Gallery was opened ten years ago with the support of the TIKA- Turkish Agency for International Development and Coordination and the Municipality Stari Grad headed by Ibrahim Hadzibajric.